The Senior Source’s Spirit of Generations Luncheon at the Hilton Anatole proved to be a true calling on Wednesday, November 20. With a mammoth switchboard on stage, Spirit of Generations Awardees Marla and Mike Boone laughed their way through the calls that came in from business associates, former presidents, friends, the Boone kids and even a voice from above. But … END_OF_DOCUMENT_TOKEN_TO_BE_REPLACED

The chill of the evening might have discouraged some folks from venturing out on Thursday, November 11, but the guests for the 2019 Crystal Charity Ball underwriters party were rewarded with a feast of food in a marvelous setting at Tavia and Clark Hunt's home. In addition to the dining room table filled with goodies, there was an extra glow thanks to collection of diamonds. It … END_OF_DOCUMENT_TOKEN_TO_BE_REPLACED

Over the decades, the Cattle Baron’s Ball has been the strongest frontliner for cancer research and treatments. From that first get-together back in 1974 — when the entertainment was a neighborhood band and a guest hopped up on stage to sing along and the take was $56,000 — it’s been raising seven-figure funds and eyebrows annually. BTW, that guest was none other than Charlie … END_OF_DOCUMENT_TOKEN_TO_BE_REPLACED

To celebrate the 10th anniversary of the Winspear Opera House, Winspears were on the red carpet as well on stage for the Dallas Opera's 1st Night black-tie fundraiser on Friday, October 18. While Ellen and Don Winspear were in their best formal outfits for the red carpet and seated dinner in the venue’s adjacent tent, four-legged cheetah Winspear made his operatic debut on … END_OF_DOCUMENT_TOKEN_TO_BE_REPLACED

For the 25th anniversary of Tablescapes fundraiser, the Dallas Kappa Kappa Gamma alumnae had the “key” to success on Monday, October 14, and Tuesday, October 15, at the Dallas Country Club. Co-Chairs Anne McPherson, Kim Purnell and Stacey Walker arranged for a trio of folks to top the days’ activities including  Tablescapes Founder Louise Griffeth as honorary chair and the 2019 … END_OF_DOCUMENT_TOKEN_TO_BE_REPLACED 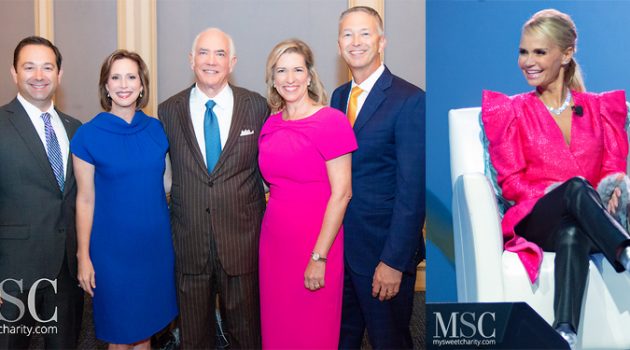 To celebrate its 20th anniversary, Baylor Scott And White Dallas Foundation's Celebrating Women Luncheon Chair Laura Downing and her gal-pal/Underwriting Chair Cheryl Joyner picked a lively sprite as their keynote speaker  —Kristin Chenoweth. While Kristin had not been a victim of breast cancer, she had more than witnessed the fear, frustration and cruelty of the disease in … END_OF_DOCUMENT_TOKEN_TO_BE_REPLACED

The stars were in perfect alignment for Park and Palate’s Dinner in the Park benefiting Klyde Warren Park on Saturday, October 5. Event Co-Chairs Brooke Hortenstine and Missy Wyszynski and Underwriting Co-Chairs Piper and Mike Wyatt had arranged for an evening that included a three-course dinner by Chef Kent Rathbun followed by a performance by Tony Award winner Stephanie J. … END_OF_DOCUMENT_TOKEN_TO_BE_REPLACED

With ponies posing for guests' selfies in the front lawn, it was pretty obvious that the annual Equest Women's Auxiliary Luncheon was getting underway at Brook Hollow Golf Club on Tuesday, October 1. Inside it was also a showcase of fashions both on the runway and in the audience. But before the first model appeared in Highland Park Village apparel, Luncheon … END_OF_DOCUMENT_TOKEN_TO_BE_REPLACED

Using Dallas Symphony Gala Co-Chair Barbara Daseke as his muse, event producer Todd Ficus filled the Meyerson with fluttering faux butterflies and whimsical wonder for the fall season's first black-tie gala on Saturday, September 28. Adding to the occasion the guests arose to the occasion with ladies in fabulous gowns and the gents stealing a bit of the … END_OF_DOCUMENT_TOKEN_TO_BE_REPLACED

KidneyTexas Inc.'s 2oth anniversary celebrated at its 2019 Runway Report with absolutely everything from former Dallas Cowboy greats parading the runway to one tyke, confronted with the applauding guests, scurrying backstage on Tuesday, September 24, at Brook Hollow Golf Club. In fact, there was so much, including a tribute to the late Mary Lee Cox, an interview with … END_OF_DOCUMENT_TOKEN_TO_BE_REPLACED

While North Texas Giving Day was on the verge of breaking its own record in an 18-hour fundraiser, another record of sorts was being announced at Anne and Steve Stodghill's Preston Hollow mansion on Thursday, September 19. But this record was of the musical type. It was the announcement that Nashville’s Country Music Hall of Fame and Museum would be bringing its mega-fundraiser … END_OF_DOCUMENT_TOKEN_TO_BE_REPLACED