It was 29 years ago that Susan Glassmoyer and Victoria Snee pledged Kappa Kappa Gamma at SMU. Just a year later, Kappa alumna Louise Griffeth, along with other alums, created Tablescapes to raise funds for non-profits. Now, nearly three decades later, Susan and Victoria were co-chairing Tablescapes by Candlelight on Monday, October 10, and the Tablescapes Luncheon on … END_OF_DOCUMENT_TOKEN_TO_BE_REPLACED

The last time there was this much excitement over a fashion event it was for the late Karl Lagerfeld’s 2013 “Chanel Métiers d’Art” at Fair Park, which had the sartorial set licking their lusciously plumped lips over an extravaganza that included Anna Wintour, Andre Leon Talley, actress Lily Collins joy-riding a mechanical bull and shipped-in models and notables like Hamish … END_OF_DOCUMENT_TOKEN_TO_BE_REPLACED

Since 2022 Crystal Charity Ball Chair Susan Farris had announced the theme for the ball on Saturday, December 3, would have an Italian flavor, “Italiano Splendido,” it delighted fashion lovers that Dolce & Gabbana would be featured at the CCB Fashion Show chaired by Jennifer Dix on Thursday, September 8. When the big day came, it was … END_OF_DOCUMENT_TOKEN_TO_BE_REPLACED

Last night seemed like Christmas in the Mockingbird Room of Highland Park Village. There was no decorated fir tree or elves, but there was lots of good cheer. It was all due to 2021 La Fiesta De Las Seis Banderas Co-Chairs Michaela Dyer and Kim Quinn, who presented a $348,000 check to La Fiesta's 2021 beneficiaries. Here's a breakdown of the recipients, with the Highland … END_OF_DOCUMENT_TOKEN_TO_BE_REPLACED

Looking over the black-tie crowd in the foyer of the Anatole’s Chantilly Ballroom on Saturday, June 5, La Fiesta de las Seis Banderas Co-chairs Michaela Dyer and Kim Quinn were grateful that the weather hadn’t interfered with any of the week’s activities. True, the night before the Fiesta Under the Stars had had its issues with air conditioning and valet parking. But that was … END_OF_DOCUMENT_TOKEN_TO_BE_REPLACED

As 50 Crystal Charity Ball committee members arrived for the CCB Midpoint Luncheon at the Katy Trail Ice House on Wednesday, June 2, there was a slight audio issue. The music over the PA system was playing some tune that was peppered with a word that rhymes with “luck.” A quick word to management changed the next song on the playlist to something that was more G-rated. But … END_OF_DOCUMENT_TOKEN_TO_BE_REPLACED

With pandemic restrictions easing, the 2021 Crystal Charity Ball committee held its annual Midpoint Luncheon to update one and all on the progress made so far for the yearlong fundraising for Dallas County children’s nonprofits. With the threat of rain being delayed, the site of the luncheon was a perfect pick — the ever-popular Katy Trail Ice House. The outdoor … END_OF_DOCUMENT_TOKEN_TO_BE_REPLACED

La Fiesta de Las Seis Banderas 2021 Co-chairs Michaela Dyer and Kim Quinn are definitely moving ahead with what may be the biggest formal fundraiser of the year so far. With plans for 40 duchesses and their escorts to bow at the Hilton Anatole on Saturday June 5, they kicked off the pre-event festivities yesterday with the Preview Luncheon for mothers of the 2021 duchesses and … END_OF_DOCUMENT_TOKEN_TO_BE_REPLACED 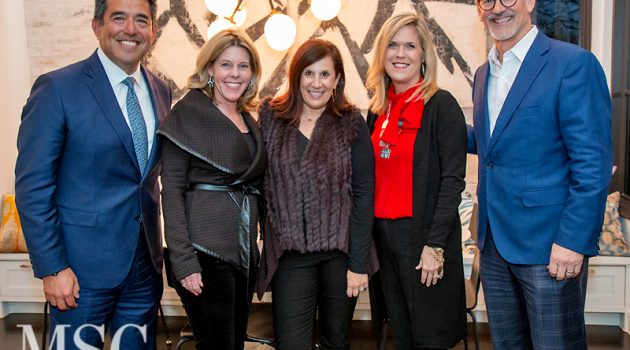 As jammed as the corner of Hillcrest and Northwest Highway was on Wednesday, February 26, where a Tesla collided with a sedan during drive home traffic, the corner of Greenbrier and Turtle Creek Boulevard just blocks away looked pretty crowded, too. It wasn’t due to the backup from the slam-bang accident. Rather it was the La Fiesta De Las Seis Banderas’ Gentlemen's Night … END_OF_DOCUMENT_TOKEN_TO_BE_REPLACED

At first, the South America Mosaic theme had some guests scratching their extension-layered locks about how to dress for the 2019 Crystal Charity Ball on Saturday, December 7, at the Hilton Anatole. Others got right to it, however, deciding to "just go bright" — or to search for a creative designer. In the end everything came together beautifully beneath the huge … END_OF_DOCUMENT_TOKEN_TO_BE_REPLACED

The usual fear of every party planner is, “What if nobody shows up?” Well, on Friday, December 6, it was just the opposite in the Mary Kay Suite at the Hilton Anatole. The get together was to celebrate Pat McEvoy’s reign as Crystal Charity Ball chair. While the invitation read that the partying would start at 5:30 p.m., a gaggle of the CCB-ers showed up at 5 even before … END_OF_DOCUMENT_TOKEN_TO_BE_REPLACED