The Genesis 25th Annual Luncheon on Friday, May 11, at the Hilton Anatole was the perfect kick-off to the Mother’s Day weekend. Among the estimated 1,600 in attendance, mothers and their offspring like Gail Turner with daughter Jessica Turner-Waugh and Ashlee Kleinert doing double duty as mother of Connie Kleinert Bbikan and daughter of Nancy Ann Hunt were spotted throughout the Chantilly Ballroom. It was also noted that a surprising number of men were in the crowd.

But before the ballroom filled to what seemed like capacity, a meet-and-greet was held in the Wedgwood Room with keynote speaker/actress/entrepreneur Hilary Swank that boasted such guests as Robin Bagwell, Genesis Women’s Shelter Board Chair Nancy Best and Genesis Women’s Shelter First Husband Steve Langbein. Thanks to a very well-coordinated setup, the step-and-repeat with Hilary was seamless with no breakdown or slowdown.

That smart planning also extended to the start of the program. Despite the large number and the close quarters of tables, the crowd’s attention was immediately directed to the large screens with a 30-second video followed by Luncheon Co-Chairs Jane and Michael Hurst welcoming the group and Rev. Dr. Sheron Patterson providing the invocation with her signature “A-m-e-n!”

Running on schedule, guests were just finishing up their lunches (Mandarin orange and strawberries over fresh butter lettuce, crispy stuffed chicken with orzo and spring onions and dark chocolate mousse cake with passionfruit gelee and berry tart with butter streusel), the Hursts were back, but this time he was doffed his suit jacket. They were getting down to business recognizing the various elected officials and sponsors and sharing the news that they were with $12,000 of their day’s goal.

They then announced that thanks to the 2018 Jane Doe Awardee Legal Aid of Northwest Texas, Genesis clients had been provided legal representation at no cost. 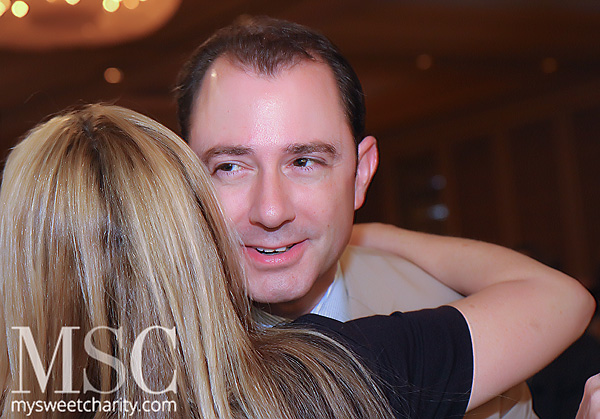 As Jane and Michael left the stage, they were replaced by HeROs Board President Crayton Webb told the audience that Judge Roberto Canas had been named the HeRO awardee for his influence in the battle against domestic violence, both in his Criminal Court #10 as well as “spearheading the country’s efforts to save lives by improving and enforcing a gun surrender program that keeps guns out of the hands of abusers.” As Crayton emphasized, “Violent people should not have guns.”

Following Crayton was Genesis Women’s Shelter CEO Jan Langbein, who recalled how the first luncheon had been at the Melrose 25 years ago. Over the years, the problem of domestic violence has come to the forefront with it being a part of the #MeToo movement. As Jan put it, “Women are no longer responsible for not getting raped. Rather rapists are responsible to not rape.”

Jan revealed that the videos that had been shown throughout the luncheon were a part of a campaign “Be Her First Step” by the American Advertising Federation’s local affiliate Ad 2 Dallas for Genesis. Since its launch, the campaign has created 7M impressions. (Editor’s note: The campaign won first place in the recent National Public Service’s annual Admerica! Competition in Chicago. According to the Ad 2, “The campaign, which included TV, out of home, digital ads and website content creation garnered over 56 million impressions and delivered over $690,00 in value over 5 months.”)

At 12:37 Jan introduced Hilary, who took her place on the stage for a conversation with WFAA’s Sonia Azad. Highlights of the conversation included: