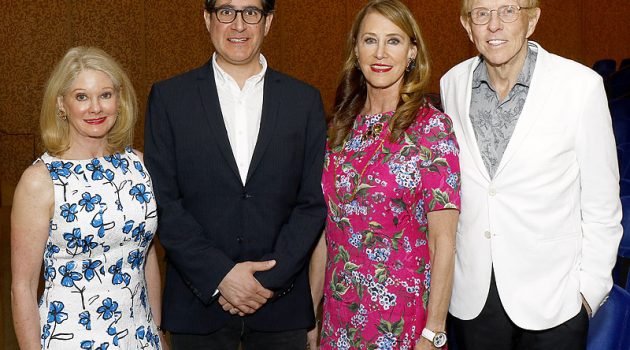 With spring inching its way to North Texas, the Dallas Museum of Art League held its annual Art in Bloom at the DMA with artist Michael De Feo. Not only did the artist tell the group about his "flower journey," he offered pieces of at for raffle and auction and signed his books. On Monday, March 27, Art in Bloom began at 10:00 a.m. with a reception in the Museum’s … END_OF_DOCUMENT_TOKEN_TO_BE_REPLACED

Perhaps it was the parting of ways with his beloved 110-foot yacht, "Tie Breaker," last August, but Stanley Korshak owner Crawford Brock with open collar announced that he just might go tie-less from now on. He revealed this news as he greeted more than 50 "2018 Art in Bloom: Power Of Flowers"  fans including Pat McDonough, Jill Goldberg, Sarah Jo Hardin, Carol Resnick, … END_OF_DOCUMENT_TOKEN_TO_BE_REPLACED

While others scurried around shopping and dragging out Christmas decorations, Pat McDonough’s Park Cities home was all decked out just in time for the right-official Art In Bloom 2018 kick-off party on Wednesday, December 6. From needlepoint ornaments to charming little Kris Kringles throughout the home, the only thing missing was mistletoe. Late to arrive was … END_OF_DOCUMENT_TOKEN_TO_BE_REPLACED

Despite the New Year’s chill, 2018 Art In Bloom Chair Dyann Skelton is providing a breath of spring beauty. The featured speaker for the Dallas Museum of Art’s fundraiser on Monday, March 26, at the DMA will be NYC-based artist Michael De Feo, “known in the street art movement for his iconic flower images around the world under the moniker, the Flower Guy.” As part of his … END_OF_DOCUMENT_TOKEN_TO_BE_REPLACED

Despite North Texas being in fundraising overdrive for 2017, plans are already being revealed for 2018. The annual Art In Bloom (AIB) is already set at the Dallas Museum of Art for Monday, March 26, thanks to AIB Chair Dyann Skelton. She’s already got Barbara and Steve Durham on board as the honorary co-chairs and the theme — Power Of Flowers. In addition to a … END_OF_DOCUMENT_TOKEN_TO_BE_REPLACED