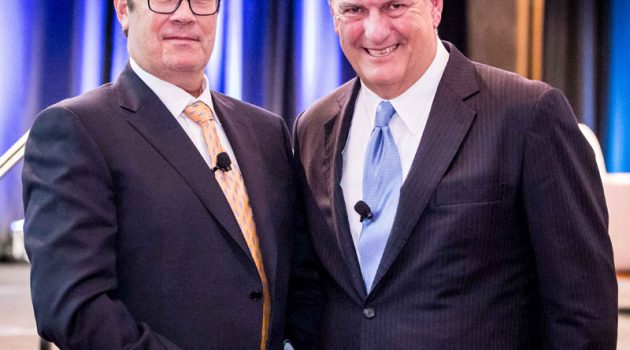 Tom Dunning seemed amazed. The longtime civic leader was looking on as a 17-piece mariachi band performed in the lobby of the Hilton Anatole, part of the entertainment for the 36th Annual H. Neil Mallon Award Dinner on Friday, November 1. "I've never seen a mariachi band that big!" Tom marveled, smiling slightly. While the group, called Mariachi Sol Azteca, was indeed large, … END_OF_DOCUMENT_TOKEN_TO_BE_REPLACED

While downtown Dallas streets and surrounding highways were clogged due to the presence of President Donald Trump's presentation at American Airlines Center, an invitation-only crowd gathered at Mary McDermott Cook's Dump Top on Thursday, October 17. The occasion was for Readers 2 Leaders supporters to learn about the dismal state of literacy among grade schoolers. Here's a … END_OF_DOCUMENT_TOKEN_TO_BE_REPLACED

While the corny-dog crowd strolled the Midway and the exhibitions on the second day of the 2019 State Fair of Texas, the beautiful butterfly people clustered at the Meyerson Symphony Center on Saturday, September 14. The gathering of the North Texas black-tie set was for the 2019 Dallas Symphony Orchestra Gala, with cool-guy violinist Joshua Bell on stage with the Dallas … END_OF_DOCUMENT_TOKEN_TO_BE_REPLACED

According to Night At The Museum:Ignite Co-Chair Marlene Sughrue, My husband John [Sughrue]and I are honored to co-chair the Night at the Museum: Ignite fundraising gala on Saturday, November 9, benefiting the Perot Museum of Nature and Science. The Perot Museum holds a special place in our hearts and is a treasured community resource for Dallas – a true gateway to the … END_OF_DOCUMENT_TOKEN_TO_BE_REPLACED

Drew Brees, the Super Bowl-winning quarterback for the NFL's New Orleans Saints, has thrown plenty of game-winning touchdown passes during his career. And on May 9, he threw another one as the top attraction at the fourth annual Rising Stars Luncheon benefiting After-School All-Stars North Texas at Brook Hollow Golf Club. The ASASNT nonprofit offers free, comprehensive … END_OF_DOCUMENT_TOKEN_TO_BE_REPLACED

The Dallas Museum of Art’s Board of Trustees voted to have Catherine Rose and Bill Lamont Jr. carry on in their roles as board president and chair, respectively. According to Bill, “Catherine’s undeniable commitment to and passion for the Museum have shaped this institution in dramatic and exciting ways and the entire Board of Trustees looks forward to her continued … END_OF_DOCUMENT_TOKEN_TO_BE_REPLACED

As riders on scooters rolled along the sidewalk from Klyde Warren Park to Ross Avenue, they encountered highly fashionable moving obstacles as guests at the 2019 Art Ball arrived on Saturday, April 27, at the tented gala benefiting the Dallas Museum of Art. Organizers disclosed that attendance for the 54th annual bash at the art museum would be around 365. Hearing this one … END_OF_DOCUMENT_TOKEN_TO_BE_REPLACED

Springtime’s Dallas Museum of Art’s fundraiser Art in Bloom has always provided an opportunity for silks and breezy looks to step out. Event Chair Eleanor Bond had decided to change things up a bit. After all, it was the 20th anniversary of the Dallas Museum of Art fundraiser. Instead of the luncheon and lecture taking place on a Monday, she arranged for two sessions on Sunday, … END_OF_DOCUMENT_TOKEN_TO_BE_REPLACED

Who would have thought that the end of March would have felt like the first of January? With weather dropping nearly 30 degrees from the day before, Dallas Museum of Art League’s Art in Bloom’s held a back-to-back Joie des Fleurs on Sunday, March 31, at the Dallas Museum of Art. While the ladies wore their prettiest spring outfits, some of the gents opted for turtle … END_OF_DOCUMENT_TOKEN_TO_BE_REPLACED

With the skyline of Dallas in the background, Readers 2 Leaders gathered at Mary McDermott Cook's DumpTop to discuss the challenges facing school children when it comes to literacy on Wednesday, October 17. Following a presentation by United Way of Metropolitan Dallas’s Chief Strategy, Impact and Operations Officer Susan Hoff, Mary made a statement that provides food for … END_OF_DOCUMENT_TOKEN_TO_BE_REPLACED

Back in the early 1900s young women were limited in their opportunities. If they were born into families of wealth and standing, they made their debuts, married well, had children and tended to the family's prominence within the community. If they were what-would-eventually-be-called "middle class," they would attend school and/or get a job until they married a respectable … END_OF_DOCUMENT_TOKEN_TO_BE_REPLACED