If a person's character can be glimpsed in an instant with the smallest of gestures, some attendees at a Dallas Arboretum event recognizing Luci Baines Johnson were treated to a revelation about the guest of honor on Tuesday, October 26. It happened midway through an outdoor reception for Luci — the daughter of former President Lyndon B. Johnson and his wife, Lady Bird Johnson … END_OF_DOCUMENT_TOKEN_TO_BE_REPLACED

It’s not surprising when a generation carries on the family business. Perhaps it’s because daughters and sons grow up witnessing their parents’ experiences and naturally pick up on the ins-and-outs of the trade. So it was with Bryan Hobson Wildenthal. His father Bryan Wildenthal was president of Sul Ross State University in the West Texas town of Alpine from 1952 until his … END_OF_DOCUMENT_TOKEN_TO_BE_REPLACED

Nearly 40 years ago two gals planted seeds for a program in 1982 that would sprout into a Dallas treasure. Having lived through the Great Depression, two World Wars, the Kennedy assassination and evolving roles of women, they had emerged as leaders within the community through their philanthropy and foresight. Their names were Margaret McDermott and Virginia Nick. The seeds … END_OF_DOCUMENT_TOKEN_TO_BE_REPLACED

Ebby Halliday and Margaret McDermott came from two different backgrounds. Ebby was a country gal who found her way to Dallas and went from selling chapeaus to chateaus. Margaret graduated from Highland Park schools and worked as a journalist at the Dallas Morning News covering the upper crust of society. But these two ladies had much in common besides living past … END_OF_DOCUMENT_TOKEN_TO_BE_REPLACED

Today the Dallas Arboretum Women’s Council’s 2020 Mad Hatter’s Tea was to take place at the Arboretum. The weather would have been simply ideal for the annual fundraiser for the 3.3-acre A Woman’s Garden, but COVID-19 trumped all the efforts for it to take place. https://www.youtube.com/embed/C95Psy932Xw As disappointed as Council President Venise Stuart and 2020 … END_OF_DOCUMENT_TOKEN_TO_BE_REPLACED 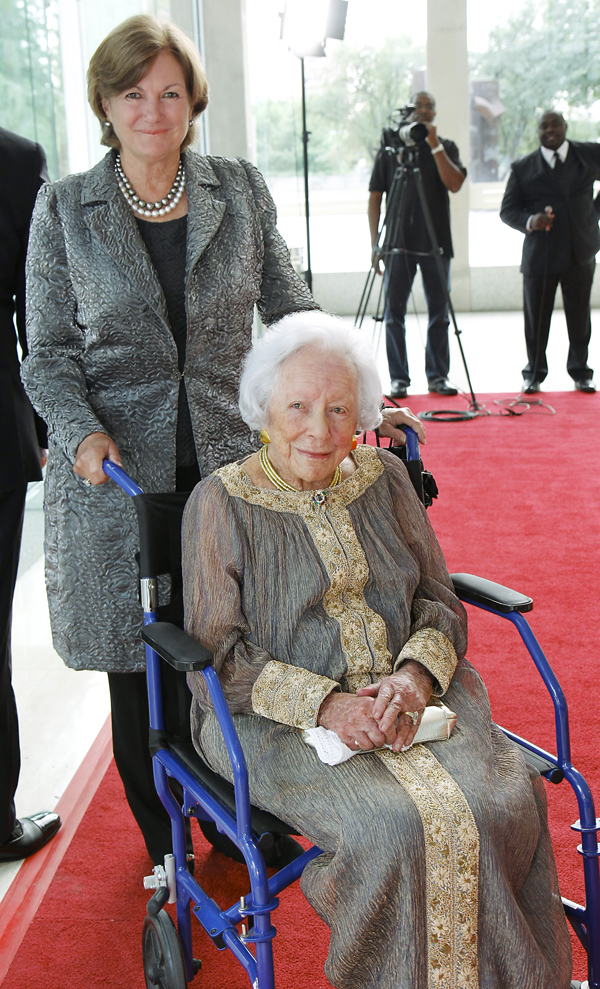 Back in the early 1900s young women were limited in their opportunities. If they were born into families of wealth and standing, they made their debuts, married well, had children and tended to the family's prominence within the community. If they were what-would-eventually-be-called "middle class," they would attend school and/or get a job until they married a respectable … END_OF_DOCUMENT_TOKEN_TO_BE_REPLACED

With the Dallas Symphony Orchestra undergoing some major transitions this year with the arrival of new President/CEO Kim Noltemy, the departure of Music Director Jaap van Zweden and the search for Jaap’s replacement, the Dallas Symphony Association Board of Governors decided to add some heavyweights to its leadership. It was just announced that art-loving philanthropists … END_OF_DOCUMENT_TOKEN_TO_BE_REPLACED

The Brook Hollow parking lot looked like the world’s most luxurious car lot with Bentleys, top-tier Mercedes and cousins like Range Rovers, Lexuses and Cadillacs on Tuesday, November 14. No, it wasn’t a glamorous car convention. It was the Center for BrainHealth’s Legacy Award Dinner honoring North Texas First Lady of Philanthropy Margaret McDermott. While Margaret tends to … END_OF_DOCUMENT_TOKEN_TO_BE_REPLACED

If anyone mistakes the Center for BrainHealth types as strictly cerebral types, who sit around and use four syllable words, they definitely need to rethink that train of thought. Need proof? Well, Brook Hollow was filled to the max with North Texas’ extreme boldfacers for the Legacy Award Dinner on Tuesday, November 14. And what else would one expect when the … END_OF_DOCUMENT_TOKEN_TO_BE_REPLACED

Holy moly, the 2017 fall//winter season got off to a topsy-turvy start within the first two weeks of September. The TACA Custom Auction Gala got off to a rocky start on Friday, September 8. But a week later things picked up with the Crystal Charity Ball Fashion Show that turned out to be more than a homecoming back to the flagship store with a parade of fashions by designer Zac … END_OF_DOCUMENT_TOKEN_TO_BE_REPLACED

With sweeping gowns and bow ties ranging from feathers to colorful prints, the 2017 Dallas Symphony Gala officially kicked off the mega-gala fundraising season on Saturday, September 16, at the Meyerson. Joining the leadership team of Co-Chairs Lisa and Clay Cooley was Honorary Chair Margaret McDermott.   In addition to being a lavish show of swell-egants, … END_OF_DOCUMENT_TOKEN_TO_BE_REPLACED