There’s nothing better than ending the last week of July with a seven-figure show of philanthropy. OK, so maybe it would be nice if there was a cold front accompanied with a nice rain shower. But Bank of America is stepping in with $1,318,800 for 43 North Texas non-profits with the goal of advancing long-term economic success. The timing of the grants is perfectly planned … END_OF_DOCUMENT_TOKEN_TO_BE_REPLACED

For the 600 of those who made the sacrifice of donating one of their evening gowns and/or accessories for Comerica Bank’s Prom Drive, it should warm your hearts on this frigid day that you’ve made countless high schoolers over-the-top happy. They will now attend their prom dressed to the max. With the help of the Comerica Bank North Texas Women's Forum, the Boys And … END_OF_DOCUMENT_TOKEN_TO_BE_REPLACED

Is there an upside to Thursday’s arrival of Winter Storm Landon? Heck, yes. You’re gonna be stuck at home and after the amazement of the season’s snowfall wears off, you have the perfect opportunity to help without leaving your bedroom. It’s in that closet way far in the back, where you’ve stowed your long-ago gown that was something special for a night. But now it’s just … END_OF_DOCUMENT_TOKEN_TO_BE_REPLACED

It's not every day that more than 35 North Texas nonprofits get grants and the chance to showcase their programs and offer volunteer opportunities. On Saturday, February 16, the Junior League of Dallas along with presenting sponsor Bank of Texas not did just that, but they held the day-long event at NorthPark Center! From the grant presentation in Neiman Marcus NorthPark's … END_OF_DOCUMENT_TOKEN_TO_BE_REPLACED

It’s not too soon to be thinking about proms. While moms and daughters will be checking the best racks in town for the perfect dress, there are a lot of young gals who won’t be able to have that luxury due to lack of funds. What should be a wonderful night can become a fretful experience worrying if a dress will be had. However, Comerica Bank is once again stepping in to … END_OF_DOCUMENT_TOKEN_TO_BE_REPLACED 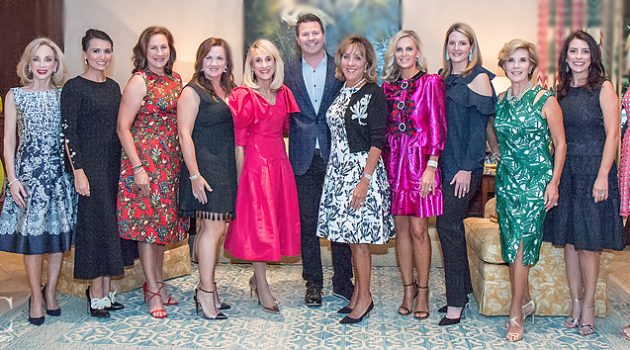 According to 2018 Crystal Charity Ball Chair Claire Emanuelson, The mission of Crystal Charity is to support agencies that provide vital services to the children of Dallas. Hundreds of generous individuals, corporations and foundations will make it possible for many of the underserved youth in our community to have access to the life changing programs offered by the eight … END_OF_DOCUMENT_TOKEN_TO_BE_REPLACED

The valets of the Crystal Charity Ball Advisory Board get together on Thursday, April 5, were told to expect 50 cars. But the line of cars around Carolyn and David Miller’s marvelous Highland Park home was so full that the number had to be beyond the predicted count. But that was to be expected, since the invitees included the 2018 CCB beneficiaries, the CCB advisory board … END_OF_DOCUMENT_TOKEN_TO_BE_REPLACED

There are times when people come together and part with things that are dear to them. But they also know those "things" have a greater purpose than being "belonged." An example of this people-giving-to-strangers was the recent Comerica Prom Dress Drive.  The shout-out was made that five Dallas-area Comerica banking centers would be the "drop zone" for new or … END_OF_DOCUMENT_TOKEN_TO_BE_REPLACED

Last week was full of news and this week is looking like a repeat performance. This first one is worth more than $6M for the good of Dallas County children! 2018 Crystal Charity Ball Chair Claire Emanuelson and her committee finished the daunting selection of the 2018 CCB beneficiaries. After weeks of vetting, interviewing and presentations led  by Charity … END_OF_DOCUMENT_TOKEN_TO_BE_REPLACED

It’s time to part company with old friends. While many gals are cleaning gently experienced grown-up fashions from their closets for the Salvation Army Fashion Show and Luncheon, there are some retired prom dresses that could be put back into action. Dallas CASA and the Boys And Girls Clubs of Greater Dallas have hundreds of girls, who just might not be able to go to their … END_OF_DOCUMENT_TOKEN_TO_BE_REPLACED