Marianne Staubach may be the wife of two-time Super Bowl quarterback/real estate magnate Roger Staubach and the mother of Dallas City Councilperson Jennifer Staubach Gates, but on Tuesday, January 7, she was a chauffeur and a NorthPark personal shopper.

It seems that husband Roger was still off-limits in the driving category following his hip replacement surgery a few weeks before. Despite Marianne’s trying to explain that his recovery demanded a slo-mo tempo, Rog wanted to hi-gear it in full force.

After dropping Roger off for the announcement of the 2020 Children’s Cancer Fund models in NorthPark’s NorthCourt under the Ad Astra sculpture, Marianne undertook her second challenge — shopping for two upcoming grandchildren’s birthday gifts.

While Marianne was shopping, NorthPark matriarch Nancy Nasher slipped in to celebrate the youngsters, who will be runwaying with local celebs on Friday, April 17, at the Anatole.

Earlier in the day Nancy had decided that the kids and their families needed a little more polish for the 2020 “Together We Gold” and provided $250 of NorthPark Gold to their favor bags.

Before the official roll-out of models took place on stage, the NorthCourt was filled with activities like a primping station wo/manned by the Toni and Guy crew, CBS11’s Karen Borta interviewing celebs and their families and loads of foods courtesy of Season 52.

When it came time for the big announcement, emcee Scott Murray and CCF Executive Director Jennifer Arthur invited the Fantastic Four Co-Chairs Holly Davis and Jamie O’Banion and Honorary Co-Chairs Troy Aikman and Roger to join him on stage for a photo opp with the class of 2020 models (Aaron Budhwani , Melissa Coronado, Liam Duarte, Bianca Fullerton, Madilyn Hallford, Reagan Harris, Drew Herrell, Jawed Hussein, Shay Johnson, Ben Jones, Nora McDonald, Will McKie, Jacob Pletan, Chelsey Reichenberger, Maria Schwarz, Campbell Sena, Addie Leigh Spencer, Dylan Stewart, Christopher Villarreal and Grayson Prewett). Everything went swimmingly except for a couple of the wee ones who shied away from the onstage action. No problem; the Fantastic Four hopped down from the stage to congratulate the hard-to-get types and to pose for a quick snap. 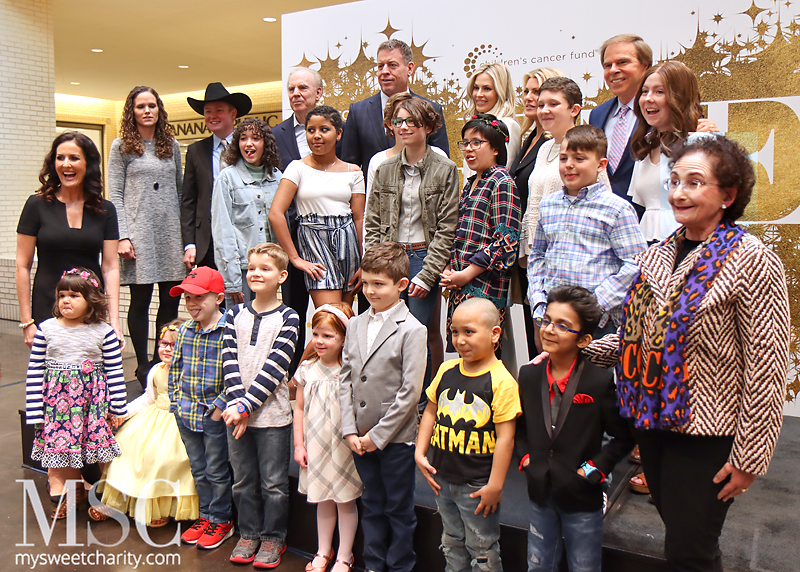 After the group photo was taken, Troy was corralled for a group of area journalists to get his feedback on the end of Jason Garrett’s days as the Dallas Cowboys head coach and the hiring of Mike McCarthy as head coach. The good news is that Troy knew that he was going to be slammed by the media inquiries, but he wasn’t going to bail on the announcement of the CCF models.

For a look at each of the models and others, check out MySweetCharity Photo Gallery.