Brent Christopher and his Communities Foundation of Texas were extra-busy at the Mabel Peters Caruth Center Thursday, April 7. First, there was a reception scheduled for the winners of the CFT-administered O’Donnell Foundation’s annual Excellence in AP Arts and Music Theory Award Scholarships. As soon as it was over, there would be an event for nonprofits participating in CFT’s Data-Driven Decision Making (or D3) Institute.

Bow-tie clad Brent, however, looked as unflappable as ever at the AP event with attendees including Nancy Dedman, David Corrigan, Nell Beck, Gay and Bill Solomon, Elizabeth Boeckman and Jim Bass. They’d all gathered to celebrate the four recipients of this year’s scholarships, awarded to outstanding high school seniors participating in the O’Donnell Foundation’s AP Arts and Music Theory Incentive Program. This year’s recipients—Jierui Fang of Plano West Senior High School, Emily Hua of Plano West, Wenjia Li of Plano West, and Ananya Rajesh of Coppell High School—each will be receiving $20,000 scholarships to help them attend and graduate from the colleges or universities of their choice.

After welcoming remarks by Serena Y. Ritch, the O’Donnell Foundation’s senior program analyst and director of arts programs, each winning student was introduced to the audience by a teacher at her school. Sarah Depetris of Plano West brought up Jierui, who disclosed that she wants to pursue a career in healthcare entrepreneurship.

Akiro Sato, also of Plano West, introduced both Emily and Wenjia. Emily explained how she’d been captivated by the paintings of Vincent Van Gogh (especially his “Wheat Field With Cypresses”), and feels “a connection to the artist’s time.” Akiro called Wenjia “a modern-day Renaissance woman”: while she had a musical composition performed by the Austin Symphony, she’s also a self-described “huge science nerd” intent on studying biochemistry at Harvard, Yale, or Rice.

Tamera Westervelt brought up Ananya, “the most gracious, humble, and poised student I’ve met in 24 years of teaching.” Ananya, who said art helped her find balance in her life, wants to attend UT Arlington, get an MBA and become a management consultant. 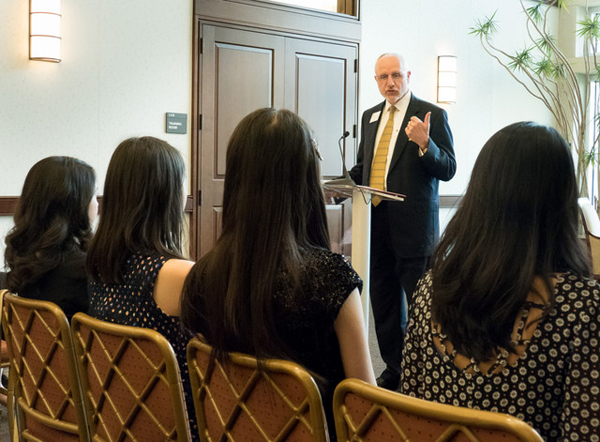 Dr. Samuel Holland, dean of the Meadows School of the Arts at SMU, concluded the program by exhorting the scholarship students to “seek out [their] own ‘edge zone’ ” of transformation and unlimited possibility in order to achieve success. Seems like a pretty sure bet that they will.