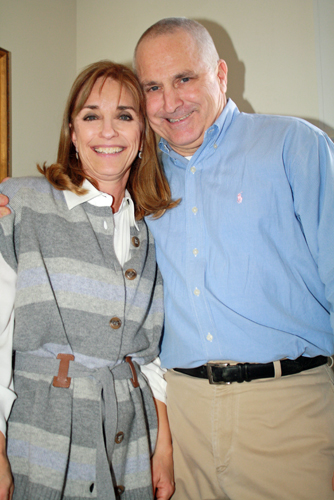 On any beautiful Sunday there is a traffic backup on Lawther Drive both ways. This past Sunday there was a particularly interesting log jam in front of the house known for decades as Mount Vernon. More current estate watchers know that it is the home of Teresa and John Amend (pictured right with Teresa Amend).

With police directing traffic and valets parking cars on an empty lot a an estate away, normal White Rock visitors were a little puzzled about all the hullabaloo. No one was getting past the front gate unless their name matched up on a list.  The great and the wish-we-were-great were humbled by the lineup. But this wasn’t the first such wait-your-turn for the afternoon.

The occasion was the 2nd Annual Super Bowl-A-Thon and Fundraiser for Global Health Corps hosted by former first daughters Barbara Bush and Jenna Hager. After Checkpoint Charlie at the entrance, VIP guests, who had been told to show up for a 2 to 3 meet-and-greet with the Former First, you turned your vehicle over to the valets (one was pleased to tell guests that he had just met President Bush) and headed to the next lineup at the check in. Then you thought (mistakenly) that you were headed to “the” room where you would chat with former First Couple Laura and George Bush. Nope. You just became part of a line tha 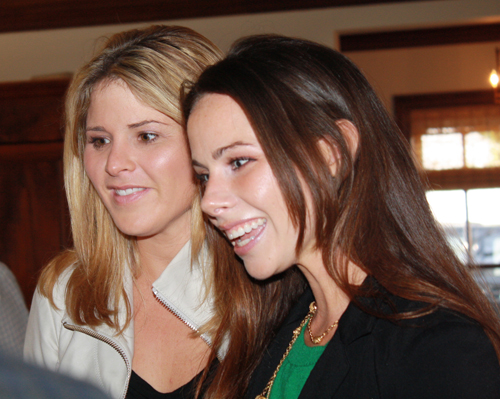 t would put the Six Flags Over Texas cues to shame. First there was the kitchen (loved it), you met First Twins Jenna Hager and Barbara Bush (pictured right with Jenna Hager). They were the ideal prototypes for sorority rush. Every guest felt as if they were greeted with sincerity and interest. Knowing the Bush gals, it was just the case. Jenna told how she only wished she and hubby Henry could afford to buy a place in NYC as rumors said. Nope. After living in Baltimore, they were simply renting in the Big Apple, where Jenna is a correspondent for NBC.

Barbara was just back from Africa and beaming with the hope of what could be accomplished thanks to the funds raised at the event. 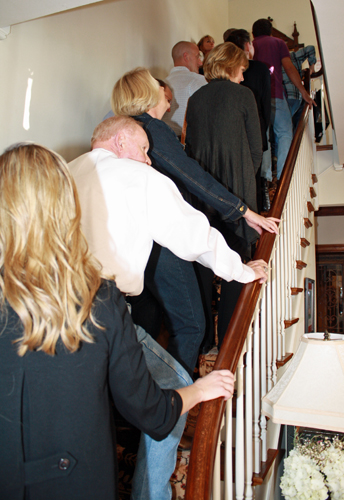 Then it was a U-turn and up the stairs (pictured) to a bedroom. But, alas, no Mama and Papa Bush. Just marvelous collectibles and memorabilia of past Amend days. You did know that the house was built in the 30’s and had gone through various “touch ups” by the H.L. Hunt family and the Amends, didn’t you?

Then you  snaked back through the hallway past the workout room into another couple of mini-hallways. But there were few complaints since it gave guests the opportunity to peak at the legendary mansion’s private quarters. At times the lineup took on a cocktail party atmosphere sans alcohol as people ran into neighbors, business associates and friends. Imagine an adult version of the lineup for the NorthPark Santa.

Then guests came upon an opening with a gaggle of beauties who took your purse, cellphone and paraphernalia to have your picture taken with the Former Firsts. You were then quickly shuttle into a small room where the briefest of “Howdys” were exchanged with Laura and George W. Bush. A quick snap by a photographer and you were done. Did we mention the hunky Secret Service folks who had cords hanging from their ears? They were with you every inch of the way. But, shoot, they’re all so cute, who could complain.

After the “quickie” with the Former Firsts, you then headed down the staircase and were thanked by extremely hospitable hosts Teresa and John, who had literally turned their house over to a mass of 500 strangers to raise funds for Barbara Bush’s cause. 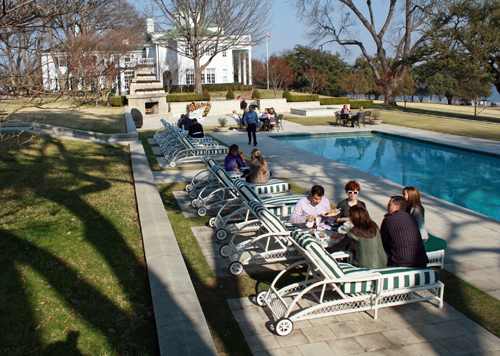 Feeling a bit like a pinball machine ball, you bounced out to the back acreage with its tennis court, gloriously perfect swimming pool (pictured), game room, bowling complex and absolutely perfect view of White Rock with its sailing boats. 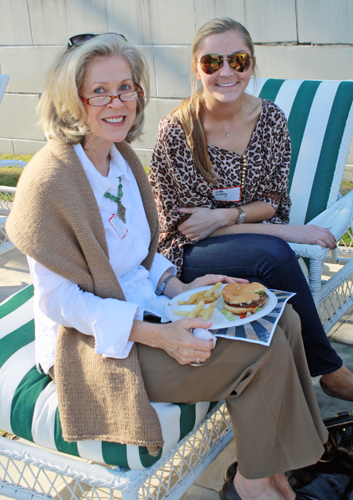 But who could complain? To add to the perfection was the scent of Goff hamburgers that were being served between the game room and bowling complex. When guests failed to realize that there was a second serving line, Goff’s owner mom Debbie Francis (pictured left with Lauren McElroy) stepped right up and advised folks to try the alternative.Joining Debbie and husband Jim was Debbie’s god daughter Katie Bivins.

But that was the only hitch to a perfect Sunday afternoon at White Rock Lake from the Amends estate.

Included in the crowd were former advisor Harriet Miers sipping a Coke, Alan Peppard and his gaggle of gals and the Bush twins’ former lifeguard Matt Vondeahe and wife Jennifer, who bumped into Contai 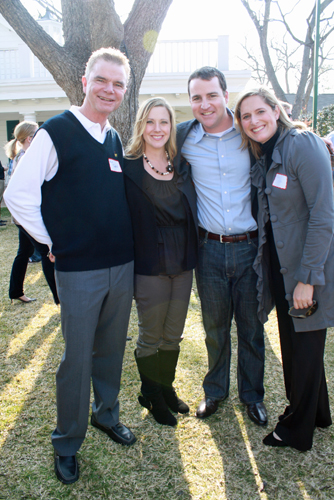 After the Former Firsts had posed for more photos than Santa at NorthPark, they joined the crowd that included your ROTC members from Marine Military Academy.

Little did the 500 guests know that their day in the sun would be short lived. The Amends must have connections, because Mother Nature really changed the landscape 36 hours later.