Unlike years past when the Museum of Nature & Science‘s annual Dinner in the Wild  tended to more the “nature” aspect of the museum, the November 18th theme was Fly Me To The Moon. So it made perfect sense to hold it at Frontiers of Flight Museum.  However, with 1,000 guests, long tables of silent auction items and highly-decorated tables taking up both floors, the flight tended to be as bit cozy as a shuttle capsule at times. The coziest spot was the hallway leading from the entry to the side exhibit halls and bar. But who could blame the log jam when there were so many items to peruse?

Checking the crowd conditions like a top-notch flight attendant, Museum Exec Director Nicole Small looked quite adorable in her 1970’s Emilio Pucci uniform from the good old Braniff days when Harding Lawrence jazzed up uniforms. She had located the dress at Vintage Martini.

Speaking of Braniff, old timers not only recalled the defunct airline but also the headlines it made back in the 1969 when Ross Perot chartered a Braniff jet and named it “Peace on Earth” to promote the release of the North Vietnamese POWs.

Among those checking out the silent auction items and utilizing the computer bidding was Lyda Hunt Hill, who was looking forward to 2011 already. Not only is the Margaret Hunt Hill bridge scheduled to open in October, but Lyda will be moving her office in April with a perfect view of the bridge’s 40-story tall arch. Lyda was dazzling in an aqua blue glittering top that she recalled buying when she was a deb. Just goes to show that classics are timeless.

Another couple considering a bid or two were Museum COO Terrell Falk and her husband Jim.

Standing on the sidelines were AT&T’s Holly Reed with Mayor Tom Leppert’s right-hand man Chris Heinbaugh. Holly was looking forward to a calmer Christmas to New Year’s period this year, since the AT&T Cotton Bowl Classic will be held on January 7 instead of New Year’s Day.

Others deciding not to venture through the crowded hallway included petite Nancy Dedman, who made a beeline for the Richard W. Cree Exhibit Hall and the mezzanine to check out the amazing centerpieces (pictured) by Garden Ga 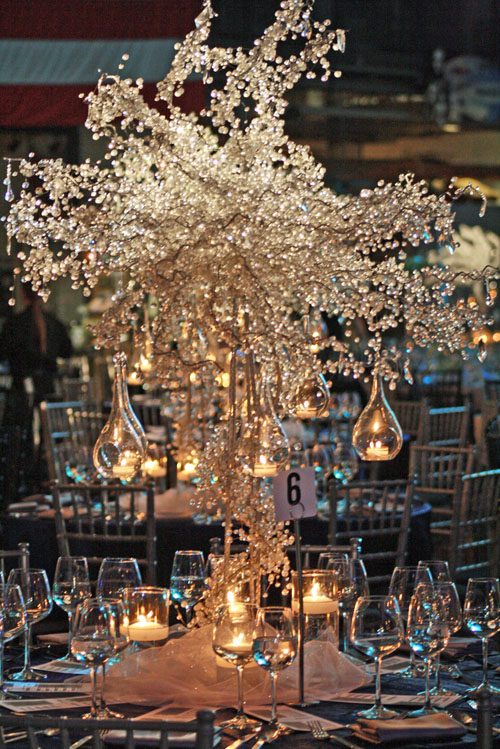 By 8:10 p.m. the crowd was seated and welcome by Nicole on the stage in the main hall with the sound of jets landing and taking off at adjoining Love Field.

“High rollers” (i.e., guests on the mezzanine) felt a little like they were watching the stage from the moon. Those seated at tables on the second row had to stand to see the stage around the centerpieces and tables bordering the railing. Again, not a big deal since they were having so much chatting.

What were they chatting about? Bedbugs! Mattress Giant CEO Michael Glazer admitted that the pesky little critters really had not been a problem in the Dallas area, as they have been in other parts of the country.

Tonya Ewing was giving her husband Tim a hard time for making her change her outfit at the last minute. Seem the svelte Tonya had planned on wearing a black dress, but Tim reminded her that it was a moon-ish type party and convinced her to rummage through her closet for a gold spangled dress that she hadn’t worn in ages. Despite Tonya’s protests, Tim was right. She looked spang-tacular!

Meanwhile on the stage, chair Honorary Chair David Corrigan and his wife Emily greeted the group. Then Nicole introduced Mayor Tom, who told the crowd, “the success of our city will be determined by our avility to educate our young people.” He went on to offer a special thanks to Margot and Ross Perot Sr. (pictured right with Ross Perot Jr.) and the Perot family, who were all there.

At 8:22 p.m. it was announced that dinner was to be served. Ah, just perfect timing for a school night. The delicious first course of Creole lobster bisque individually was poured into warmed bowls over Texas goat cheese tart. Everyone was sipping and very happy.

Then a slight “oops” happened. As guests chatted waiting for their meals, the minute hands on the analogue watches ticked away. At 8:45 p.m., guests were starting to give each other the raised brow. Was this becoming a trend to allow an extended period of time for digestion between first course and second? On a school night no less?

Promptly at 9:00 p.m. the live auction began with the beef tenderloin dinner on the mezzanine just starting to appear. The mezzanine guests, who had wanted to bid, sent for programs to learn what was on the auction block. Evidently no one had placed the programs at the tables. Too bad because they missed the first item — Adopt-A-Dinosaur and private event for 100 people at the Museum of Nature & Science. Valued at $7,500, it went for a blue-light special bid of $4,500.

By the time the auction was over, the museum had scored a sell-out event with a successful auction and a near-full moon to watch them drive home.