Monday’s “A Conversation with a Living Legend” benefiting MD Anderson Cancer Center should have been titled, “A Friendly Interrogation of a Living Legend.” Interviewer and former NBC anchor Tom Brokaw had decades of research and was not going to let his friend, honoree  Bob Schieffer, off the hook on stage at the Hilton Anatole.

But before getting to that “stage” of the day’s event, there was a press conference for the two with Dr. John Mendelsohn (pictured right with, from the left, Tom Brokaw and Bob Schieffer), president of the University of Texas MD Anderson Cancer Center. At the media session, the subject matter focused on cancer. 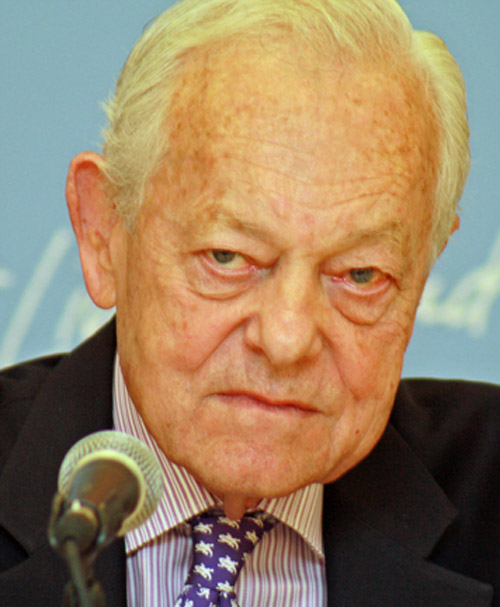 After revealing that “my mother died of breast cancer because she was afraid to go to the doctor,” Bob (pictured) added that his bout with bladder cancer taught him that people don’t like to talk about “below-the-belt diseases.”

On the subject of smoking, Brokaw didn’t hold back when asked about the new tougher warning labels on cigarette packages: “Whatever it takes,” said Tom, “I’d put a big skull and crossbones on the package.”

Dr. Mendelsohn admitted that he saw a future where one day cancer would be considered like pneumonia was to his parents’ generation.

Following the press conference, Tom told how there were eight doctors in his family including one of his daughters, who went to Stanford with Charlotte (Jones) Anderson. 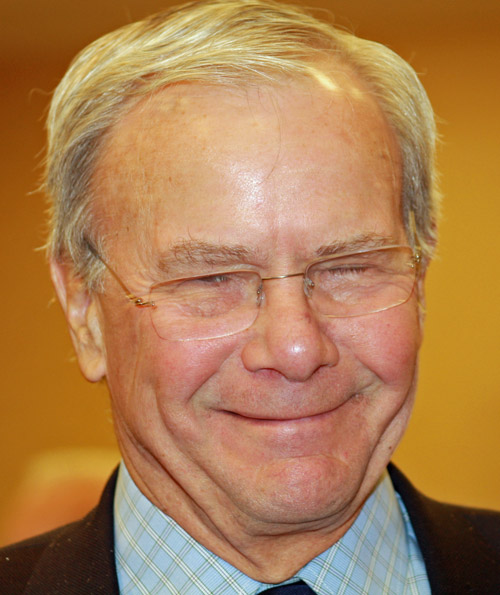 Speaking of the Jones family, Tom (pictured) went on to say that he had attended the Cowboys/Eagles game the night before. NBC sportscaster Bob Costas had told him for a long time that he just had to see the Jones’ stadium in Arlington. Brokaw’s review? “It’s done with so much elegance. Everybody was having a great time.”

Someone noticed that 70-year-old Tom was walking rather gingerly. It seems that he had broken his ankle a couple of weeks before while on an ATV. Then he said, “I hunted on it the next day, which probably wasn’t the smartest thing.”

While Tom was chatting, 73-year-old Bob was looking healthy, spry and happy posing for pictures with the TCU Air Force ROTC (“The Flying Frogs”). He told them how he had been a member of the ROTC at TCU, which made the smiles in the photo all the bigger. 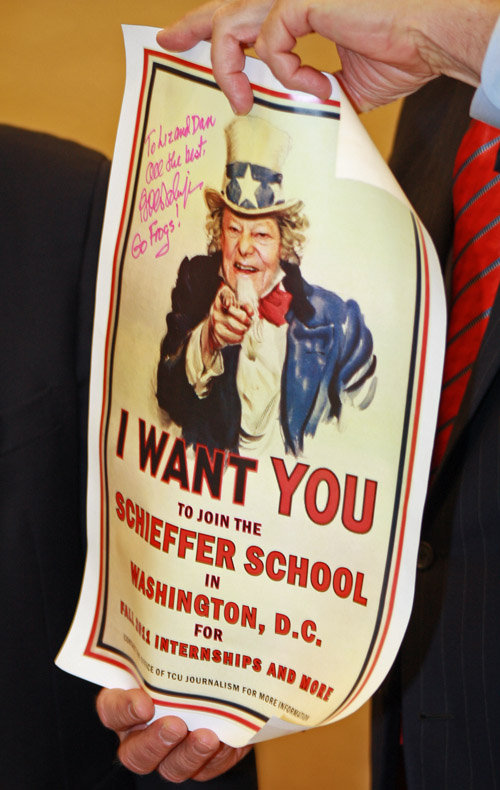 He also autographed an “Uncle Schieffer Wants You” recruitment poster (pictured)  for Washington internships for the Schieffer School of Journalism at TCU.

Ah, but all of this was just a warm-up for the main event.

As 795 guests ambled into the ballroom, some legends were spotted in the group like Madeleine and T. Boone Pickens, Margaret Crow, honorary chairs Margot and Ross Perot and writer/TCU alumnus Sandra Brown, who had brought husband Michael and daughter Rachel and her husband Pete to the lunch.

After the main aisle was finally cleared, Bob was escorted into the ballroom by Event Chair Gale Sliger (pictured), a 28-year cancer survivor. Late arrivals like Jan Pickens scurried to

their seats just in time for the “Flying Frogs” to present the colors.

Just a couple of minutes before noon, the group learned that the event had raised $953,360, lunch would be served and the program would start in 20 minutes.

Right on schedule, Dr. Mendelsohn followed a video about MD Anderson with the introduction of 12-year-old, cancer survivor Madison Glover, who presented Tom with a gift. In turn, Tom kissed the youngster and took his seat at a table on a stage that easily resembled Schieffer’s “Face the Nation” set.

Brokaw was a great warm-up man. He told the crowd that he had been hunting with Dr. Mendelsohn in South Texas recently: “As a quail hunter,” Tom said of the doctor, “he’s a great oncologist.”

Introducing Schieffer, Brokaw said, “He’s the single most popular figure in Washington journalism. . . a man of grace and integrity.” 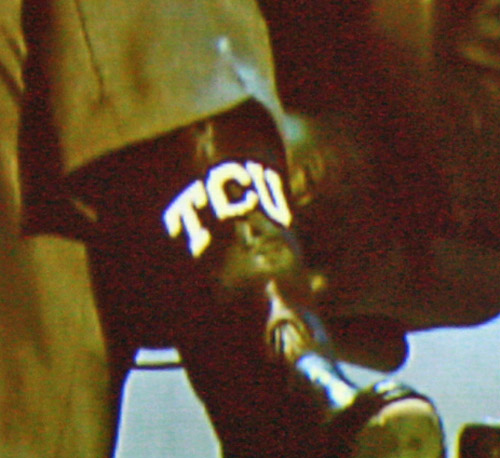 As Schieffer took his chair on stage and crossed his legs, it was noted by many that the TCU alumnus was wearing black boots emblazoned with TCU in white (pictured).

One of the first topics was the late President Gerald Ford. It was during his administration that the two journalists met. Brokaw asked what Schieffer’s most embarrassing moment was.

According to Bob it was during a press conference, when out of nowhere Ford asked Bob if he had a question. Bob went totally blank. Realizing that his bosses were probably watching, he pulled a question out of the air, “What’s the deal with the Russians?” It was just the right question, because Ford launched into an answer that turned out to be the lead story the next day. 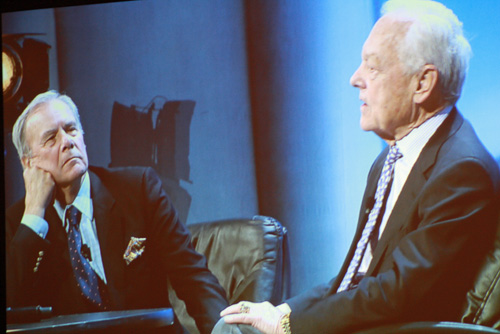 Brokaw wasn’t going to let his friend get off the hook so easily. “I thought you were going to tell about the time you asked a question that had already been asked.”

Schieffer: “I don’t recollect that time.”

When Brokaw pushed, Schieffer lobbed back with, “I don’t think we have time for that one.”

Another subject was the late grandmaster of journalism Walter Cronkite and his relationship with Bob. While Bob’s anecdotes were great, his impression of Cronkite was amazing. He sounded just like the late CBS anchor.

“Walter was the most curious person I ever knew,” Bob said.

Brokaw added that Walter’s late wife, Betsy, once regretted moving from their NYC townhome to a high rise. When asked why, Betsy reportedly said she loved the little patch of yard there. Did she like to garden? No, she replied, it was a great place to bury those awards that Walter had collected.

But all was not jovial chatting. Schieffer got down to serious concern about today’s media due to the lack of editors for bloggers and Internet communicators. Earlier in the day Brokaw had reiterated his disapproval of Twitter to a handful of folks.

Other concerns that Schieffer addressed were: 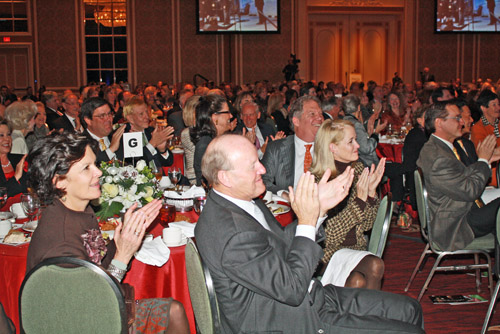 Response from the audience — applause!

Following the talk, Bob and two members of the Washington, D.C., band Honky Tonk Confidential performed “(I Wanna Be A) TV Anchorman.”

After the tune ended and the applause died down, an auction was held for four to attend a broadcast of “Face the Nation” and brunch with Bob and his wife Pat with hotel and first-class airfare included. The winning bid of $35,000 was made by Lenise Stephenson, who just happens to be an associate member of The University Cancer Foundation Board of Visitors — and the wife of AT&T Chairman/CEO/President of the Board Randall L. Stephenson (pictured left with, from the left, Lenise Stephenson and Madeleine and T. Boone Pickens).